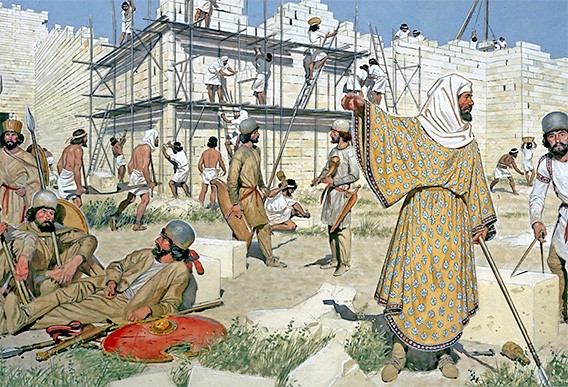 The Israelites had been in exile, slaves in a foreign land, slaves first to the Babylonians and later to the Persians who came to power. Cyrus, king of Persian (no relation to Billy Ray Cyrus) allowed them to come back to Israel and gave them assistance to rebuild their temple, thus healing their acky-breaky hearts (apologies if you have already heard that one more than once).  We can read about it in the books of Ezra and Nehemiah.

Although this was good news, they had some big challenges. They had a huge task, not only rebuilding the temple, but much of Israel. This meant not just the buildings, but the connections.  Businesses would try to restart. People would have to plant and hope to get harvest before they ran out of supplies. Not everyone was in agreement about what to do. Not everyone thought they would succeed. Not everyone was equally enthusiastic about rebuilding the temple, and decided they were doing fine without it. The book of Haggai was calling out those who were not getting on board, and he tried to inspire them “Greater will be the glory of this house the latter more than the former – says the Lord of hosts; and in this place I will give you peace – oracle of the Lord of hosts (Haggai 2:9).” To believe in God is to be a people of hope.

David set up Solomon with a lot of material to work with when he builds the temple (1 Chronicles 22:11-19). Solomon had a very wealthy and successful empire, that gave him the ability to do a lot.  The new temple would not be as magnificent as the temple of Solomon. Some were very sad that it was not like what they remembered from long ago, but others were happy that something good was happening. “Many of the priests, Levites, and heads of ancestral houses, who were old enough to have seen the former house, cried out in sorrow as they watched the foundation of the present house being laid. Many others, however, lifted up their voices in shouts of joy (Ezra 3:12).”

Many had lost a lot. Many had lost everything. Many had died.  Some would be struggling very hard just to survive, and others were doing better. I expect that there were some hard feelings about things that had happened during exile, and not everyone responded the same. There were definitely disagreements about a lot of things.

They moved forward and got things done.

Now, we are talking more and more about opening up and starting to rebuild. What in our community needs to be rebuilt? What in our lives? What should be done differently? There will be so many things. There will be much disagreement about what to do and when and how to do it. There are some hard feelings about things that have happened. Some have lost loved ones. Some have lost their life’s work.  Some are struggling to get bills paid and get enough food for their families.  Some are doing better. We shall need to be aware of the many realities that people are facing. Who will need extra attention?  Who will be able to help a lot?  Who can help only a teeny bit (We remember that in Gospel perspective, those who can only do the tiniest bit, but do it with great love are great in God’s eyes [Luke 21:1-4])?

What we do can lay a foundation for our future, and others can build on it.  When future generations look back on our time, how will they remember what we did?