You know you are in the area of the Jewish ghetto when you see ads for kosher food.

It was a small area and it didn’t take long to find the Synagogue and Hebrew Museum. (they didn’t want pictures taken, so see more at http://lnx.museoebraico.roma.it/w/?lang=en).

There was also a place that had schwarma, but it was not lunch time. (I’ve wanted to try schwarma ever since the Avengers movie.  I later found a place in Grand Rapids that served it.)

The history of Judaism in Rome involved a lot of persecution by Christians, including some bizarre practices. Jews were confined to a ghetto, forced to wear distinctive insignia on their clothing and banned from all the professions except money lending and selling used clothing. Sometimes thing got better and sometimes worse. There were mentions of some  great defenders like Gregory the great who gave orders that Jews “were not to be persecuted” (score one for Gregory the Great), but there would come a time when things would get bad and then worse, and all of Gregory’s ideas would be forgotten. We have made a lot of progress in the latter half of the 20th century, but can we say “never again”? How can we say for sure that the wind will not turn again in a century or two or five? The council of Nicea certainly wanted to wipe out Arianism for all time. They did not succeed. Heresies never really die. They did, however, cement as much as possible onto the consciousness of the Church that Jesus, a man, is “God from God, light from light, true God from true God, begotten, not made, consubstantial with the Father, through whom all things were  made (got the point?). This did as much as they could to set us on the right course and give as many tools as possible to those who would fight this error in the future.

*The first principle to hammer home is to trust the power of the Gospel story. If we trust in that power, we focus our energy, not on attacking those who think differently, but doing a better and better job telling our story in word and action. Does anyone think we do not have room to grow in how well we share the power and beauty of the Gospel story?

2nd principle: While anyone persecuting anyone is bad, and persecuting people in the name of Christianity is a special horror, there is something uniquely bizarre about Christian anti-Semitism. Folks, we worship a Jewish person!

We have received countless treasures from Judaism. That itself should give us cause to look upon the Hebrew people with reverence. They are related to our boss.

The Palatine, the oldest part of Rome, almost 2800 years old, setting part of the stage for western civilization.

The Circus Maximus was a place of entertainment and violence. 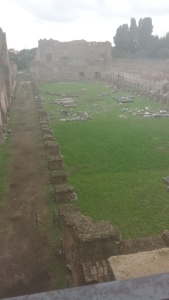 What will our place look like in 2800 years? What legacy will we leave?

The Coliseum: one of the greatest entertainment centers Rome has left us: a lot to see and to imagine. On the one hand, people could get a break from the stresses of life. On the other hand, bread and circuses while the empire crumbled. 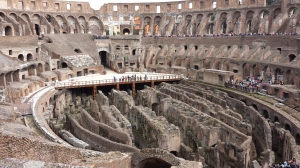 Yes, I was really there

Where does our empire stand? Are we scapegoating anyone now? Are there some group that are acceptable to mistreat while we are distracted from central issues?

Is there a nicer way to end the day than eating gelato looking at the copula of St. Peter’s Basilica? Can’t really do that in Michigan.